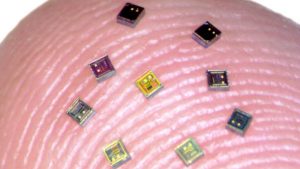 The sensing particles independently record electrical pulses made by neurons and send the signals to a central hub outside the skull for coordination and processing.

“One of the big challenges in the field of brain-computer interfaces is engineering ways of probing as many points in the brain as possible,” said Professor Arto Nurmikko. “Up to now, most brain-computer interfaces have been monolithic devices, a bit like little beds of needles. Our team’s idea was to break up that monolith into tiny sensors that could be distributed across the cerebral cortex.”

The four year project has had two major challenges: shrinking the electronics for detecting, amplifying and transmitting neural signals into grain-sized chips, and developing the external communications hub to receives signals from the grains and transmit power to them. The final receiver is a thin thumb-print-sized patch that attaches to the scalp, using a ~1GHz bi-directional transcutaneous link for communication and control.

“This work was a true multidisciplinary challenge,” said Brown researcher Jihun Lee. “We had to bring together expertise in electromagnetics, radio frequency communication, circuit design, fabrication and neuroscience to design and operate the neurograin system.”

In the rodent experiment, the team placed the grains on the cerebral cortex – the outer layer of the brain. Neural stimulation was tried as well as sensing, controlled by the same external hub.

Although only 48 devices fitted onto the rodent brain, calculations suggest up to 770 devices could be supported using a custom time-division multiple-access protocol. “Ultimately, the team envisions scaling up to many thousands of neurograins, which would provide a currently unattainable picture of brain activity,” according to the university.

“It was a challenging endeavour, as the system demands simultaneous wireless power transfer and networking at the mega-bit-per-second rate, and this has to be accomplished under extremely tight silicon area and power constraints. Our team pushed the envelope for distributed neural implants,” said Vincent Leung, an engineer at Baylor University, which worked alongside Brown university with the University of California at San Diego and Qualcomm.

“Our hope is that we can ultimately develop a system that provides new scientific insights into the brain and new therapies that can help people affected by devastating injuries,” said Brown’s Nurmikko.

The researchers see this as step toward a system that, according to Brown University, could recording brain signals in unprecedented detail, leading to insights into brain function and therapies for people with brain or spinal injuries.

The wireless neural interface is described in ‘Neural recording and stimulation using wireless networks of microimplants‘. a paper published by Nature Electronics – payment is required to read the full article.