Home » TECH DEVIL » Which servos to use when breaking domino-setting record?
TECH DEVIL

Which servos to use when breaking domino-setting record? 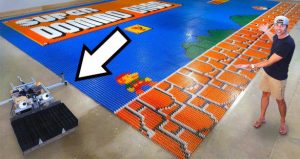 On completion, the resulting Super Mario mural took only a handful of seconds to collapse once the first row was knocked over.

Automatically loaded by another one-off machine, Dominator positioned 300 dominos at a time with an accuracy of ~2mm, both steered and driven through omnidirectional wheels powered by ClearPath servos from Teknic of New York, which bought the record attempt to Electronics Weekly’s attention – while sadly not revealing which model was used.

Rober’s record attempt can be seen in a video here which includes descriptions of the robot and the long development programme behind it – including mention of 14,000 lines of code written.

He is a prolific engineer and entertainer who has undertaken various, always elaborate, projects for his eponymous youTube channel. For fun: don’t miss the hardly-electronic Squirrel maze 2.0.