Superconductivity found in CeH9 and CeH10 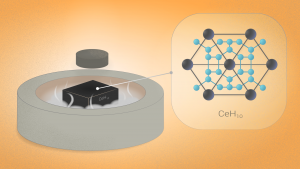 The road to superconductivity, an extremely attractive physical property of some materials that do not lose energy to heat because they have zero resistance, lies through tough terrain. It requires either extremely low temperatures (135 K, or minus 138 degrees Celsius, at the warmest) or extremely high pressure (in 2019, LaH10 was found to become superconducting at -23 C and 1.7 million atmospheres, and in 2020 a S-C-H compound was found to superconduct at +15 C and 2.7 million atmospheres).

The authors point out that now binary hydrides are mostly explored. “Now we need to carefully think how to combine the elements to achieve higher-temperature superconductivity at lower pressures in ternary hydrides. We know which elements lead to higher-temperature superconductivity and begin to learn which lead to stability at lower pressures. These are the main notes, but it takes imagination to combine them in a melody,” says researcher Dmitrii Semenok.

Nintendo Switch gets price cut ahead of OLED model launch

How to use accessibility shortcuts on iPhone and iPad