In hydrogen fuel cells, hydrogen is fed to the anode while air is fed to the cathode. An anode catalyst, typically platinum, separates the hydrogen into protons and electrons, which take different paths to the cathode – protons migrating through the electrolyte, while electrons power the external circuit. At the cathode, they both unite with oxygen to produce water and heat. 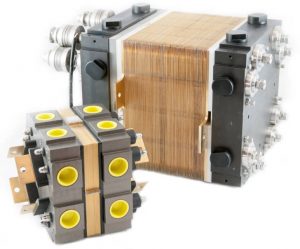 Simple in theory, in practice there are subtle decisions to be made for any particular application, including what size and design of fuel cell to use, and which control system will get the best from it.

“The key decision is to select the size of the fuel cell for optimal output,” according to Spectrum Instrumentation – more of this company later. “Larger cells provide more power output as there is a larger catalyst surface area, but this increases the weight and cost, especially with platinum as the typical catalyst. Adjusting the spacing between the electrodes in the fuel cell stack and improving the gas flows through the cell can improve the catalytic reaction and hence the performance instead of increasing size.”

Beyond this, other less obvious system parts have to be optimised in design and operation, for example: the extraction of waste water vapour to avoid blocking of the catalytic surface, and tuning heat removal for best efficiency and life.

On the subject of service life: according to ZBT, the US Department of Energy has set targets for fuel cell system lifetime under realistic operating conditions at 8,000 hours for light-duty vehicles, 30,000 for heavy-duty trucks and 80,000 for distributed power systems.

To theoretically underpin both design and operation, ZBT is working on a precise model of polymer electrolyte (PEM) fuel cell operation, confirming and calibrating it with experimental measurements. 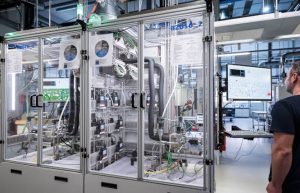 “The computer model of the fuel cell is very sophisticated such that we can adjust the many variables that affect its performance to see what changes provide performance enhancements,” according to ZBT simulation leader Sönke Gössling. “However, these are just theoretical, so the test bench [left] enables us to see how changes in real world parameters affect performance.”

A key element of this is dynamically mapping and modelling the cathode path.

“On the basis of these models, a predictive control model has been developed that controls the interplay of the compressor, the throttles and also the fuel cell load,” according to Spectrum. “This is used to optimise operation – the operating point of the fuel cell can be selected to be as energy-efficient as possible, and undesirable shortening of the service life can be avoided.”

Where test and measurement company Spectrum comes into the project, in the up-grading of instrumentation on the experimental rig. 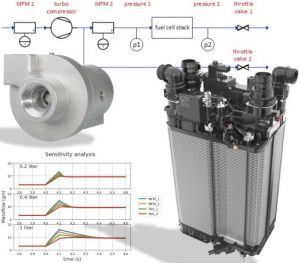 The fine-grain dynamics and location of reaction in a fuel cell have turned out to be crucial, for example to avoid local under-supply of reagents or to maintain local operating conditions.

“We quickly realised that the data capture of rate of every second was not providing us with the level of fine detail that we needed,” said ZBT’s Gössling. “We now use three Spectrum digitisers, that improved our data rate capture to 3Msample/s, as well as having twenty simultaneous channels of data. This enables us to analyse the dynamic step changes as well as analyse superimposed high frequencies at an incredible level of detail.”

They are eight-channel M2i.4652 digitisers. “The synchronisation of the cards and the connection to the test bench environment was intuitive and they have worked perfectly from day one,” said Gössling.

ZBT is a non-profit limited company in north west Germany near the Dutch boarder, owned by the University of Duisburg-Essen.

Spectrum Instrumentation offers digitiser and signal generators in formats including PC cards (PCIe and PXIe) and stand-alone Ethernet units (LXI). It makes its products in Germany.