Kagome materials have repeating pattern of hexagons and smaller triangles, with the hexagons touching at their tips (images below). The word is Japanese, relating to a basket weaving pattern.

In this case, the metal-organic is formed from two non-magnetic materials on a silver substrate: copper and di-cyano-anthracene.

The team is from Fleet, the Australian research council funded ‘Arc Centre of Excellence in Future low-energy Electronics Technologies’.

Scanning probe microscopy revealed that the 2D structure had magnetic moments at specific locations, despite its non-magnetic origins, through the Kondo effect – a temperature-dependant magnetic effect. 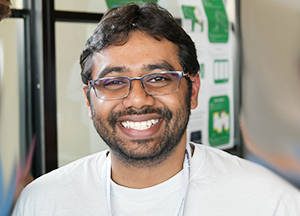 “The Kondo effect is a many-body phenomenon that occurs when magnetic moments are screened by a sea of conduction electrons, for example from an underlying metal,” said Fleet scientist Dhaneesh Kumar (left), “and this effect can be detected by scanning probe microscopy.”

While the Kondo effect revealed magnetic moments, theoretical modelling showed that the magnetism was due to strong electron-electron Coulomb interactions that are imposed by the unusual molecular geometry. These interactions hinder electron pairing, with spins of unpaired electrons giving rise to local magnetic moments. 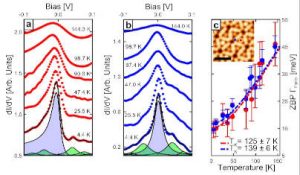 The Kondo effect gave the game away

“Theoretical modelling in this study offers a unique insight into the richness of the interplay between quantum correlations, and the topological and magnetic phases,” said Professor Nikhil Medhekar. “The study provides us with a few hints on how these non-trivial phases can be controlled in 2D kagome materials for potential applications in electronics technologies.”

Understanding how to create magnetism in organic materials is important as this allows, with the right choice of metals and organic functional groups, designer magnetic properties to be combined with chemical self-assembly.

“We think that this can be important for the development of future electronics and spintronics technologies based on organic materials, where tuning of interactions between electrons can lead to control over a wide range of electronic and magnetic properties”, said Fleet researcher Agustin Schiffrin.

Fleet is a distributed organisation. In this case, experiments and numerical analysis were performed at Monash University, with support from the Australian National Computing Infrastructure and Pawsey Supercomputing Centre.

The work is described in Manifestation of Strongly Correlated Electrons in a 2D Kagome Metal–Organic Framework in Advanced functional materials.

How Crypto Will Transform The Future Of Business?