IE4 induction motors and VFDs save 900MWh/year at paper mill 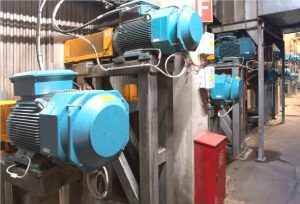 The machine, almost 80m long, has dozens of motors and operates 24 hours a day seven days a week as one of a pair that make enough paper for ~1,500 million square meters of corrugated board each year.

The machine was nearing the end of its service life.

“Recycling and energy-efficient production have the highest priority for us – from an ecological as well as an economic point of view,” said Model technical manager Philipp Lenhard. “This priority applied to the renewal of the drive systems for paper machine two. The variable speed drives were legacy models that suffered from a lack of spare parts, while the motors dated from 1991 and required an extensive overhaul.”

IE4 is the most energy efficient classification for AC induction motors.

“IE4 motors enabled us to access Swiss Federal funding for the project that would have been unavailable if we had used IE3 motors,” said Lenhard. “This grant covered around 32% of our total investment. In effect, the upgrade in efficiency rating paid for the motors from the start.”

Energy consumption has been reduced by up to 900MWh a year, with a projected payback in less than five years. On top of this, the machine can now be run 12.5% faster – its 2.5m-wide paper web running at 900m/minute rather than 800, said ABB, adding: “Furthermore, the new drive solutions will eventually allow the machine to run at one km/minute when other upgrades are carried out.”

11 Dashboard Software You Should Explore in 2021