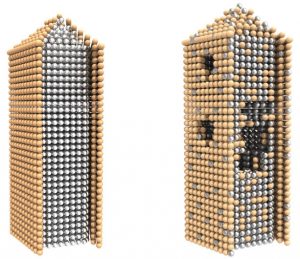 They are flexible and the most conductive of the metallic nano-wires, according to the Terasaki Institute in Los Angeles, although they are prone to corrosion.

“Silver nanowires have been employed as electrodes in various electronic devices, however, their commercial usage has been hampered by their vulnerability to the corrosive effects of heat, light, and moisture,” said the Institute. “Such corrosion can result in pits and holes or etching on the nanowire surface. Etching can be highly detrimental to silver nanowire-based device performance and can even lead to their failure.”

As the lattice spacing is almost the same as silver’s, gold plating can effectively protect the surface with an intimately bonded gold surface, except that certain gold ions (Au+ or Au3+) attach in a odd way that leaves pores in the surface.

A trick that the researchers discovered was to first complex the gold with SO32– ions, after which they lay down in even pore-free coatings. After which they created a straight-forward solution-based room-temperature method for implementing the whole process.

“We considered every possible challenge in designing an effective method to increase longevity of silver nanowire-based devices,” claimed researcher Dr Yangzhi Zhu. “Our data clearly shows that we were able to create effective solutions to these challenges.”

That is not to say the gold-plated wires survive indefinitely in all circumstances, but they last a lot longer that un-coated wires.

To learn more, read ‘Ultrathin-shell epitaxial Ag@Au core-shell nanowires for high-performance and chemically-stable electronic, optical, and mechanical devices‘, published by SpringerLink. The full paper can be downloaded without payment from the link.