Entanglement for a million qubit computer? 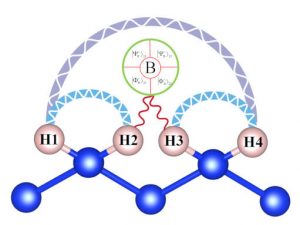 “Proton entanglement has been previously observed in molecular hydrogen and plays an important role in a variety of scientific disciplines,” said Professor Takahiro Matsumoto. “However, the entangled state was found in gas or liquid phases only. Now, we have detected quantum entanglement on a solid surface, which can lay the groundwork for future quantum technologies.”

Compared to proton entanglement in molecular hydrogen, the entanglement has a “massive energy difference” between its states, according to the university, suggesting long life and stability – necessary for usable qubits. Stability is such, that the team is talking of computers with a million qubits, compare with ~100 today, as well as atom teleportation (H1→H4 in diagram).

The reported difference between the spin singlet ground state and spin triplet excited state is 113meV.

“This could be a game-changer in quantum computing with regard to storing, processing, and transferring data,” said Matsumoto.

The team went on to model a theoretical cascade transition of terahertz entangled photon pairs using the proton entanglement.

The work is described in ‘Quantum proton entanglement on a nanocrystalline silicon surface‘, published in Physical Review B (payment required for access to the full paper).

Lenovo weekend sale: Back to school deals on Yoga, ThinkPad and IdeaPad