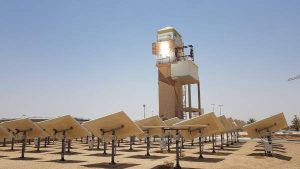 It is part of a project called ‘Desolination’, intended to improve the efficiency of both concentrator solar power and desalination. “Not only will improvement be made on the independent systems but also on their coupling taking advantage of the mutual interactions and potentialities,” according to the Politecnico di Milano, which is part of the consortium.

The final demonstration system, to be finished in May 2025, will be built on the premises of King Saud University in Riyadh.

Electricity at under 90€/MWh and fresh water at under 0.9€/m3 is expected from the prototype.

“On the concentrated solar side, carbon dioxide blends will be the core of the innovation, leading to more efficient and less expensive power cycles and controllable parameters,” according to the university. “On the water side, forward osmosis will be developed and linked to membrane distillation using the wasted heat of the power cycle to generate freshwater. Finally, a unique combination of the power and water cycles will allow the coupled system to work at high waste-heat-to-freshwater conversion efficiency.”