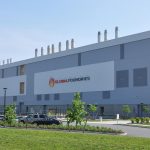 “It needs our industry to double capacity in the next eight to 10 years,” said Caufield at Semicon Southeast Asia earlier today,  “it took 50 years for the semiconductor industry to grow to half a-trillion-dollar industry, and we will need to do about the same in about a decade.”

Meanwhile some analysts have been reporting signs of an impending chip glut.

Reports that Intel has talked to Globalfoundries’s owner Mubadala about buying it have not been denied by Intel.