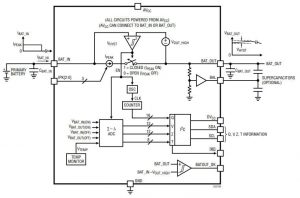 However, Coulomb counting accuracy, according to the data sheet, is ±5%.

To spread its resolution up to the maximum outut current (see below), the Coulomb counter has a pre-sclaler that can be set between 1x and 15x.

Counts are stored in an internal register accessible through I2C, and a discharge alarm threshold based on this state-of-charge is programmable – when reached, an interrupt is generated at the IRQ pin. Other things that trigger the IRQ pin are Coulomb counter over-flow and the die being too hot or too cold.

Also measured and reported over I2C are battery voltage, impedance and temperature – impedance is derived from measuring input voltage at a known load then at zero load.

To match with the characteristics of multiple battery types a low-drop constant current limiter is built-in between battery-in and battery-out, with its value pin selectable in eight steps between 5mA and 100mA.

The output is only ever either on (supplying the selected constant current) or off (0mA) – the idea is that the output capacitor (see circuit) supports the load when it has sufficiant charge. The current source is turned on and off by a comparitor monitoring input and output voltages, turning it on when the output is 135mV lower than the input (±25mV hysteresis).

“This enables the IC to present the battery with a load profile which allows it to deliver its maximum capacity, independent of the actual load,” according to the company. “This is battery friendly and prolongs the lifetime of the cell.”

The company sees it being used in applications that require only occasional power, such as dices in remote locations, electronic door locks or glass break detectors. It points out that is can also be used with rechargeable cells.

For cases where the output capacitor is a stacked pair of supercapacitors, the chip has a centre-point balance circuit and pin.