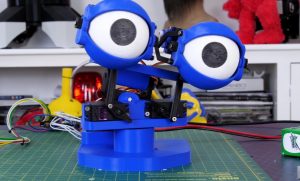 “There are lots of great animatronic and robotics props and projects out there, and it’s easy to make r/c servos and other actuators move using the Arduino servo library. This means that the servos stops and start very suddenly, moving as fast as they can between positions. In this video I’m going to show you two lines of very simple code to make things smoother.”

To demo it, he creates – via 3D-printing and an Arduino Uno – an animatronic device with two big, cute eyeballs, each on their own pivot (moving left and right only). The eyelids share the same pivot point and there are three servos in total….

In a new video, @XRobotsUK shows how to give your animatronic robot smooth servo moves using just a couple extra lines of Arduino code: https://t.co/e6bexQsr5G pic.twitter.com/kFrMgNh41c

Basically, he takes 5% of the new value read from a switch and 95% of the previous value read, slowly decelerating movement…

CAD and code for his servo motion smoothing demo can be found on GitHub.

And you can see it in action in the video below. Very impressive it is, too.